Just got a CRB!

Just got a CRB!

I've wanted this gun for a very long time.  Finally saw one in person while at the gun shop with a buddy of mine getting an XDM. (He wanted one after shooting mine. lol)

I have plans for it.  However I'm gonna need to fix the booboo in my checking account now before I pursue them. lol.

I was reading up on the sling in the stickys.  Probably going to do that. The holographic sight is the first mod to come though.  Followed by 45 degree iron sights.  Not going crazy tactical.  Just love the idea of 45 degree sights. Another thing.... May sound tacky to some, but it's a thing of mine.  A small jolly roger on each side done with a stencil I'll make, and plastidip.  Probably going to end up being a low profile dark grey.

This is me with my new vector CRB

One thing I wanted to ask... This is a 20mm picatinny rail, correct? 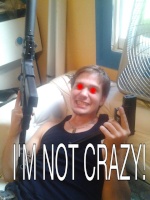 Thanks!  Just shot it yesterday for the first time.  Shoots like a dream.  Trigger is a bit on the heavy side but... it's built to be a full auto smg.  One can't complain.

I broke and ordered the holographic and 45 degree sights.  But I just got a cheap holographic to hold me over until I can get something nicer. the sights are staying though. They're nice.

And here's the rough draft I sketched up for the stencil of the jolly roger I'm gonna put on the sides in low profile, dark grey plastidip.

Check out these flip out (under spring tension) canted sights.
http://www.jgsales.com/diamondhead-d45-swing-sight-set,-front-back-flip-up,-black-p-58462.html

And if you're using those Cobra Tactical ones, you might want to read this article on Revised Battlesight Zero:
http://www.ar15.com/forums/t_3_18/328143_RIBZ_____Revised_Improved_Battlesight_Zero__now_with_down_loadable_50_yard_zeroing_target_.html

Haha. I was wishing I got those spring action ones until I saw the price. They are nice. Thanks a bunch for the article. That'll come in handy.

They should arrive monday. And the holographic should be here tuesday or wednesday. I'll take some pictures of how it comes out.

Got the 45 degree AR style sights on and the holographic on.  Looking back now, the gun looked pretty naked without it. Next up is a case that it'll fit in now. lol. And then the sling.

The holographic is tuned in with the stock iron sights.

I just have to test it out, and tune the 45 degree sights.  I'll be referring back to that discussion on the AR sights