First time out with Vector today

First time out with Vector today

I picked this SBR-length Kriss Vector secondhand last month. I was looking for something new in a Black Rifle--I've owned a bunch of ARs in numerous barrel lengths, as well as a couple of FS2000s and Tavors. I've been aware of the Kriss Vector for a few years and knew a bit about it and its unique recoil reduction system but I had not given them much thought. The other pistol-calibre carbines I'd tried left me a little unsatisfied with their "clunk-clunk" feel of the recoil, but the unique design of this one intrigued me, and the fact that it uses Glock 21 magazines meant that I already had five 10-round magazines for it.

The "SBR" version in Canada fits into the same legal category as handguns (restricted firearms), meaning range-only use. There are non-restricted versions as well with 18.6" barrels, but since I do all my shooting on the range, the restricted one works fine for me—and I also like the handiness of the shorty barrel better. I know that a 5.56mm carbine makes more sense is a real-world shooting situation, but unless my life takes a dramatically unexpected turn, I'm only shooting paper! (and, within 50m there are far worse firearms than a.45ACP carbine to have). 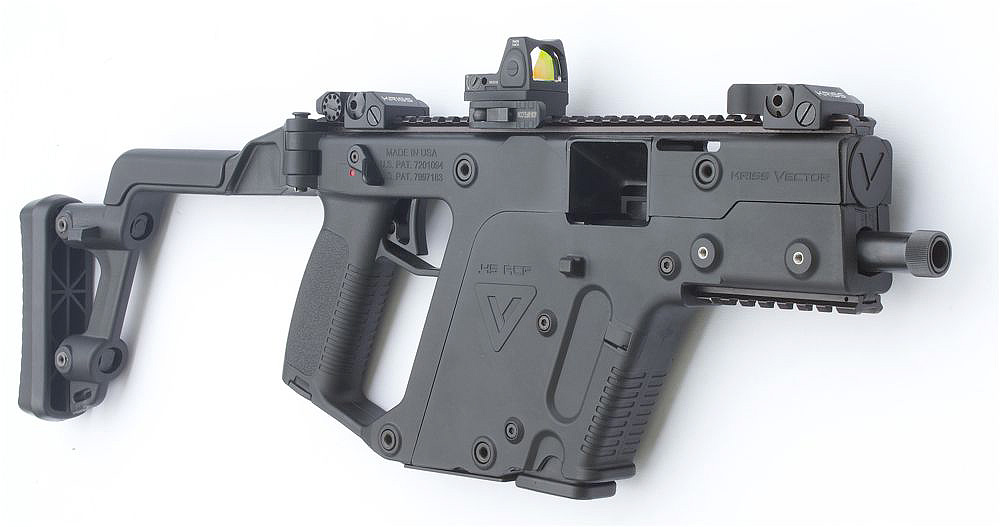 Mine came with a Tapco vertical foregrip that was mounted to the lower rail but I like the feel of the nicely grooved magwell to a fore-grip--it allows easier access to the magazine release while shooting.

I found the trigger pull fairly light but a little creepy and mushy—not a big deal since I don't imagine I'll be taking any 300m shots with it! The charging handle operates surprisingly stiffly, but from what I've read that's not uncommon--mine has not been fired much. The folding stock locks firmly open but does have just a little flex when snugging the carbine in tightly.

I'm using a 3 MOA Trijicon RMR in an American Defence QR mount—I've used this sight on an FS2000 and a Tavor but its small size and light weight make it fit perfectly on the Vector. 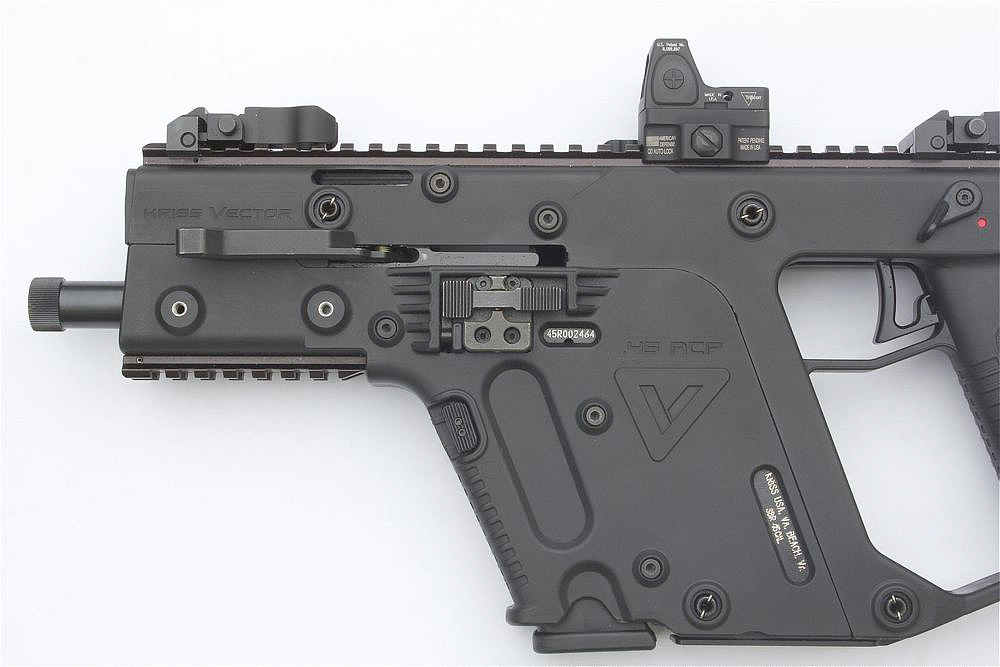 I had been under the impression that there were some pivoting parts within the mechanism but only two sliding parts that travel in straight lines, or "vectors" if you will. :-)

I had a chance to take mine out for a brief shakedown late this afternoon. 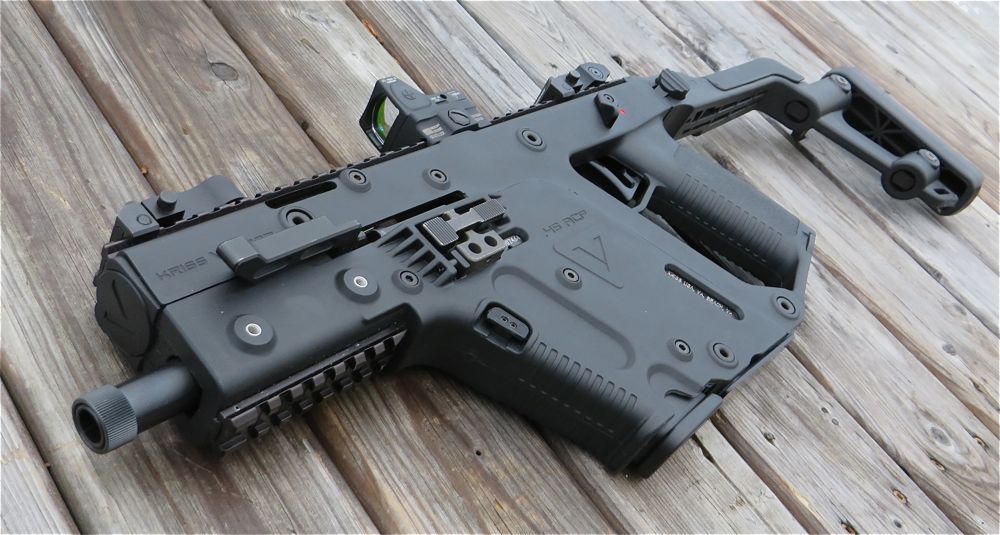 It was close to dark so I only had time for 50 rounds of 230 gr FMJ Blazer Brass and UMC. The impending darkness made it easy to pick up muzzle flash--here's a screen grab from the video below: 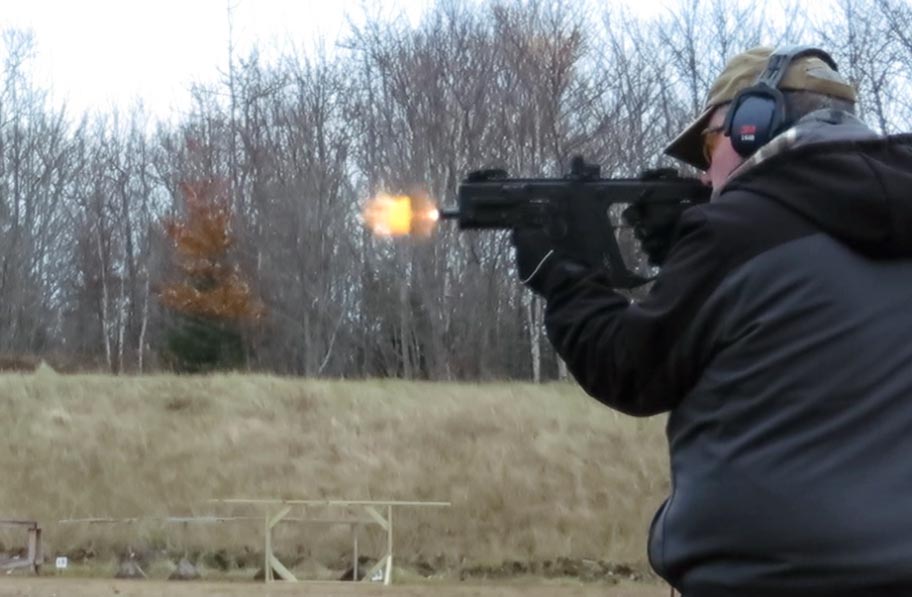 I was really impressed with the near total lack of muzzle flip. There's a bit of a rearward push but I was really surprised at how non-existent the recoil is. I had read a bunch about it and seen other video myself but until I tried it I didn't really appreciate how effective it is.  Here's a short video I took today.

Accuracy was pretty good too--here's 15m standing (each square is 1"): 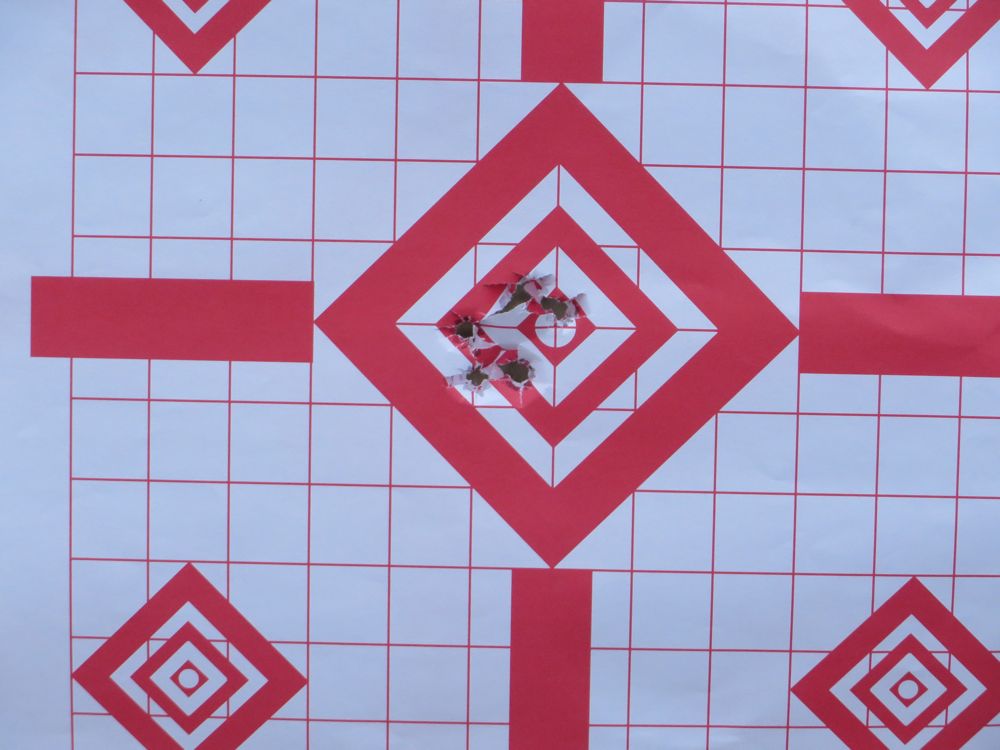 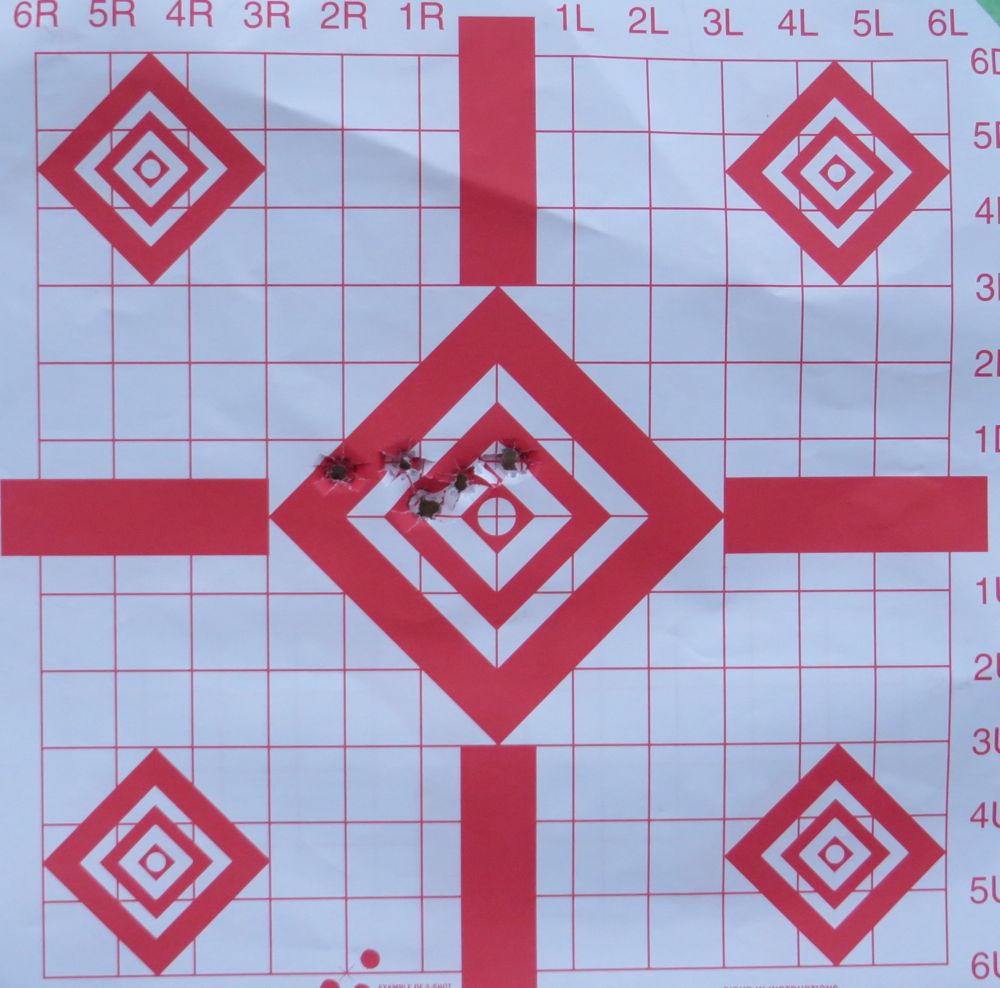 And even though it was getting dark I tried prone at 50m....it looked a long way away! 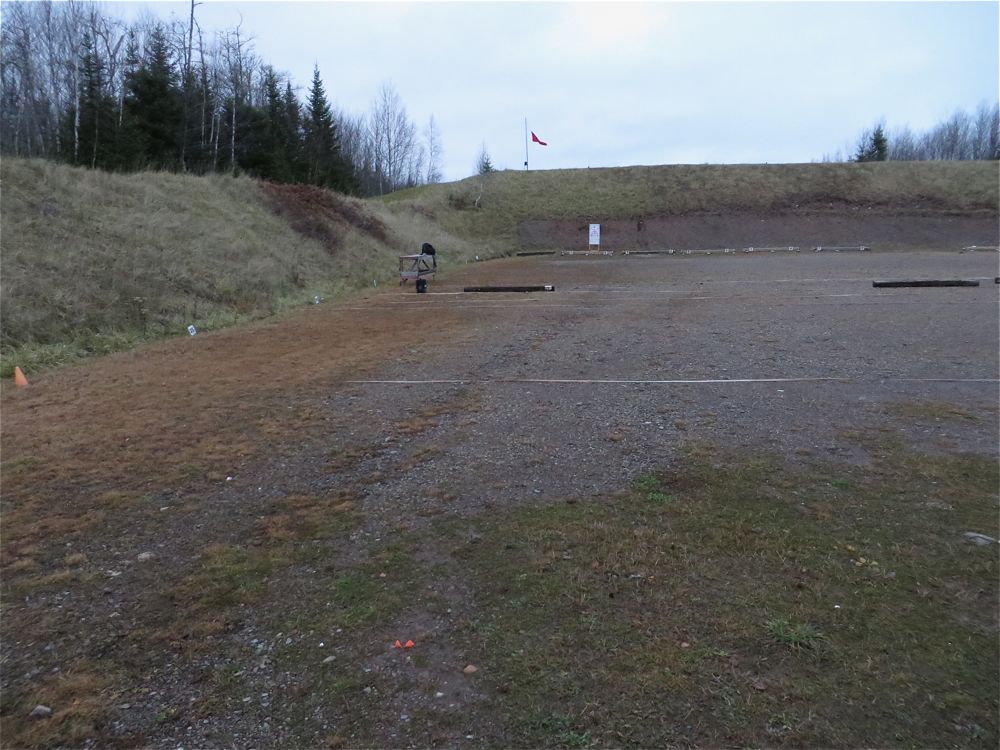 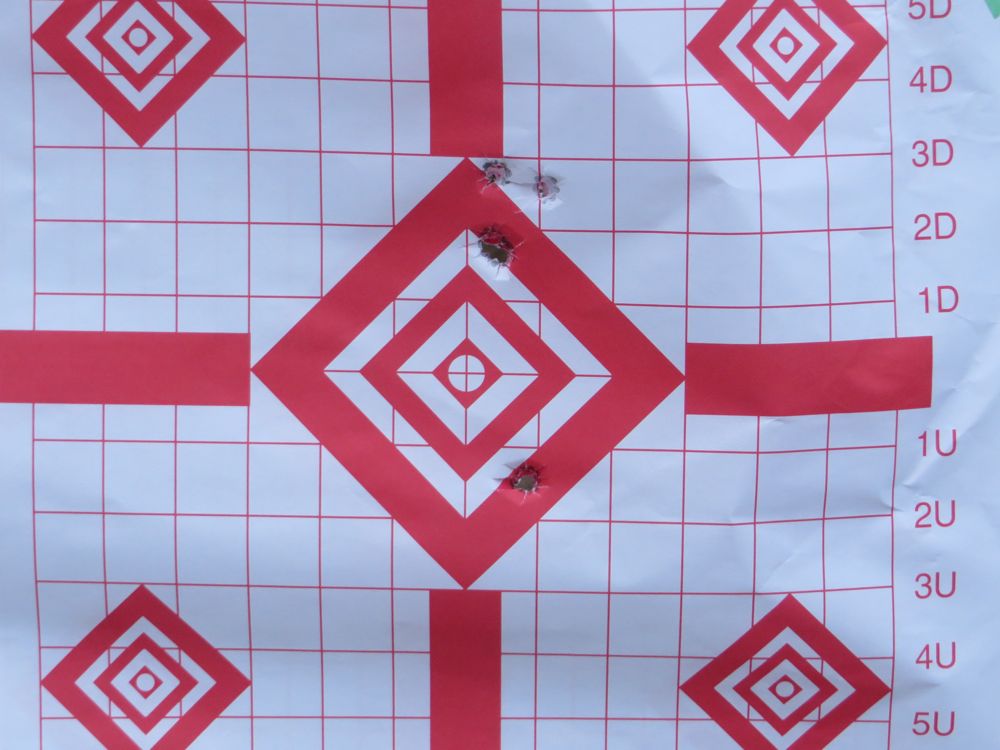 I'm really happy how it performed--with better lighting conditions and a bit more familiarity I think I could do better. 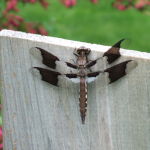 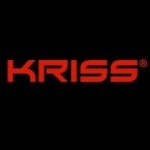 Congrat's and great write up!

Congrat's on the new toy! Great write up! I can't imagine your review if you had another hour on the range !!
That law about use of a SBR only at the range won't fly here in the STATES . I was not aware you had such lenient laws! Her we have to pay a $200 tax stamp and have a ATF background check with a near 1 year wait before we can shoot a Class 3 weapon , SBR etc.

Cheers and welcome aboard!

Aeromat209 wrote: That law about use of a SBR only at the range won't fly here in the STATES . I was not aware you had such lenient laws! Her we have to pay a $200 tax stamp and have a ATF background check with a near 1 year wait before we can shoot a Class 3 weapon , SBR etc.

Yeah, there are a few weird ways that Canadian laws are more lenient--short barreled rifles and shotguns are no problem (although short barreled semi-auto rifles are categorized the same as handguns). that's about it though, other than that things are tougher. Magazine limits, lots of prohibited firearms, transportation restrictions...it can be tough to be a gun owner (especially one that tends to like black rifles or handguns) up here.

i had same setup but a delta point and that amer. def mount, i had to lose the mount, the sight height on kriss is different than say AR because the barrel is so much lower, the lower your dot in RMR  is to the barrel the less deviation in POI (up and down) you are going to see at different distances.

Similar topics
» Second time out Kriss Vector CRB
» Third time out KRISS VECTOR .45 ACP CBR
» had an out of battery detonation today
» Does the Shroud for the Real Kriss Vector work for the KWA GBB Airsoft Vector?
» Picked up my new SDP yesterday and shot it today.